The modern science of lucid dreaming begins with the groundbreaking work of researchers, Keith Hearne in England and Stephen LaBerge in the USA. Since that first evidence, researchers have sought to understand lucid dreaming’s neurology, physiology, induction and beneficial application.

How did researchers obtain evidence for the existence of lucid dreaming? Hearne in 1975 (and LaBerge in 1978) realized that a dreaming person has rapid eye movement or REM, and may be able to ‘signal’ their conscious awareness inside the dream by moving their eyes left to right eight times. This movement would be recorded on the REM polygraph paper and provide hard evidence for lucid dreaming.

Hearne reports in his doctoral thesis (see http://www.keithhearne.com ) how lucid dreamer, Alan Worsley, signaled his awareness within a dream by moving his eyes left to right, while lucid dreaming in his sleep. This ‘eye signal verification’ technique has been replicated many times. In fact, current researchers may have the lucid dreamer move his eyes left to right four times to signal that he is aware within the dream state, then move his eyes twice to signal that he is beginning the pre-determined experiment, and signal again when ending the experiment and then wake up. In this way, experienced lucid dreamers can communicate to some degree, while dreaming and conducting lucid dream experiments in the sleep lab.

While the modern science of lucid dreaming covers forty years, the history of lucid dreaming spans thousands of years, since spiritual traditions like Buddhism, Hinduism and Sufism, report using lucid dreaming to explore the nature of the mind and consciousness. In fact, the 11th century Indian Buddhist, Naropa, claimed that dream yoga (which uses lucid dreaming as a main practice) was one of the six paths to enlightenment.

Recently, scientists have continued to investigate brain activity when lucid dreaming. In 2009, the journal SLEEP, published a study by Ursula Voss, Allan Hobson and others with the title, Lucid Dreaming: A State of Consciousness with Features of Both Waking and Non-Lucid Dreaming. In the study, they used a 19-channel EEG to record brain activity when lucid dreaming, and discovered simultaneous REM sleep and waking activity in the frontal portions of the cerebral cortex. From this, they concluded, “Our data show that lucid dreaming constitutes a hybrid state of consciousness with definable and measurable differences from waking and from REM sleep, particularly in frontal areas.”

Another study in the journal SLEEP (2012), looked at brain activity while lucid dreaming. The authors of the report, Neural Correlates of Dream Lucidity Obtained from Contrasting Lucid versus Non-lucid REM Sleep: a Combined EEG/fMRI Case Study, determined that “During lucid dreaming, the bilateral precuneus, cuneus, parietal lobules, and prefrontal and occiptio-temporal cortices activated strongly as compared with non-lucid REM sleep.” These portions of the brain connect with mental processes like self-reflection, awareness, etc., which lucid dreamers often note in their self-reports.

Looking at the Science of Lucid Dreaming

From the blog of Robert Waggoner

The scientific evidence for lucid dreaming normally starts with the work of Keith Hearne, PhD at the University of Hull (UK) in 1975 and Stephen LaBerge, PhD at Stanford in 1978. While graduate students, they both separately realized that a dreamer could become lucidly aware in a dream and possibly ‘signal’ his awareness by moving his eyes left to right a predetermined number of times to provide evidence for being consciously aware in the dream state.

Hearne, working in the sleep lab with the talented lucid dreamer, Alan Worsley, captured this eye-signal verification evidence in April 1975 on the rapid eye movement polygraph readout. LaBerge, using himself as the lucid dreaming subject in the Stanford sleep lab, captured his first lucid eye-sgnals in Feb. 1978. Looking back at that first scientifically acceptable evidence, Keith Hearne said, “It was like getting signals from another world. Philosophically, scientifically, it was mind blowing.”

With the publication of LaBerge’s work in Psychology Today in 1980, many of us learned of the scientific evidence in support of lucid dreaming. Hearne also published and discussed his results at various events and publications (see his website for more details at www.KeithHearne.com ). LaBerge’s 1985 book,Lucid Dreaming, provided additional research and insight on lucid dreaming, which helped him become a widely read author and noted researcher in the emerging science of lucid dreaming.

Looking deeper into history, one finds that lucid dreaming appears as a deeply explored and used spiritual practice in Buddhist, Sufi, Hindu, shamanic and other traditions. Some authors, like Tenzin Wangyal Rinpoche, suggests that the Tibetan shamanic Bon tradition knew about and utilized lucid dreaming for almost 8,000 years. Written records about lucid dreaming exist in spiritual texts more than a thousand years ago. Although we may prefer to see the ‘science’ of lucid dreaming emerging from the 1970’s, the actual exploration, understanding and science of lucid dreaming seems thousands of years old.

When it comes to the science research on dreaming and lucid dreaming, the amount of research funds devoted to this around the world probably amounts to a half million dollars per year, or less (and often much less). Totally underfunded and in many ways neglected, lucid dream research moves very, very slowly and often fails to attract the attention that such a discovery deserves. It seems easy for a practicing lucid dreamer to move quickly beyond the ‘scientifically’ explored aspects of lucid dreaming, therefore. However, a lucid dreamer can conduct personal and private experiments within the lucid dream, and proceed to explore it rationally.

As it stands, the neuro-physiology of lucid dreaming has received the lion’s share of research focus. In the 1980’s, research looked at the REM state characteristics of pre-lucid and lucid dreaming. LaBerge investigated in numerous studies the connection between actions performed in a lucid dream, and its affect on the physical body; these studies included lucid dreamers who altered breathing respiration, muscle tensing, eye movement, brain hemisphere function via singing and counting, and even lucid dream sex’s effect on the body. LaBerge concluded that actions performed in a lucid dream did have a corresponding influence on the physical body.

Other research looked at the prevalence of lucid dreaming in the population, gender predominance (J. Gackenbach), induction practices, possible use in halting recurring nightmares in PTSD and other areas.

In these books, Lucid Dreaming Plain and Simple and Lucid Dreaming: Gateway to the Inner Self, we explore these very important practical and conceptual needs of the lucid dreamer. Becoming consciously aware in the lucid dream seems the first step — you also need to understand ‘how’ to relate to the lucid dream, stabilize it and remain within it. By learning the principles and practices in these books, a thoughtful person has a much greater chance of feeling prepared to experience lucid dreaming at a more advanced level.
The 11th century Buddhist yogi, Naropa, deemed dream yoga (which relies deeply on the practice of lucid dreaming) as one of the six paths to enlightenment. This suggests, even to non-Buddhists, that lucid dreaming has considerable depth and wonder for those with a sense of curiosity and adventure. In these books, you will find helpful assistance, techniques and openings to the deeper experience of lucid dreaming.

"A must read for anyone with a serious interest in lucid dreams." -Jayne Gackenbach, Ph.D. Editor of Psychology and the Internet 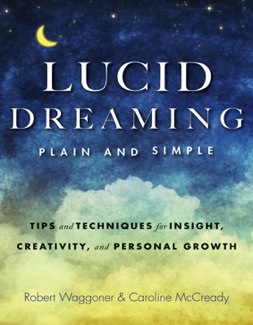 Below you will find a sampler of past issues available to download in .pdf format. When you click on the image, the pdf will automatically download. If you have an in-browser pdf reader, it may open in a new window or tab. Enjoy!

Looking for MORE past issues of the Lucid Dreaming Experience magazine? Click on Explore the LDE then on Past Issues.

Sampler of Past Issues 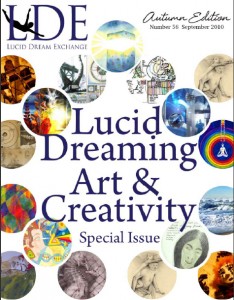 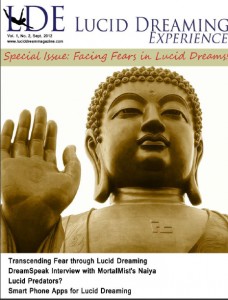 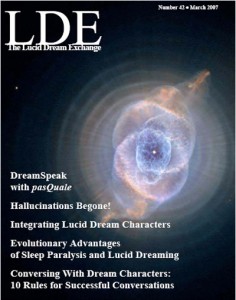 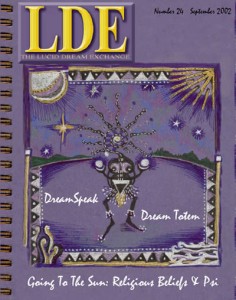 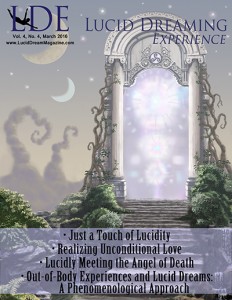